The CPH has participated in every Sian Bradwell Softball Tournament since 1991 — the first year the event was opened to non-Kirkland teams, when park time became available.

In 2022, the weather proved a large hurdle for the League to host the annual “Valois” Tournament, but they still managed to raise $4,000 for the Lakeshore General Hospital capital campaign.  The League added a further donation of $2,800 in December.  Seen below:  Eyal Artzy (Treasurer) and Carole Ravenda of the LGH Foundation. 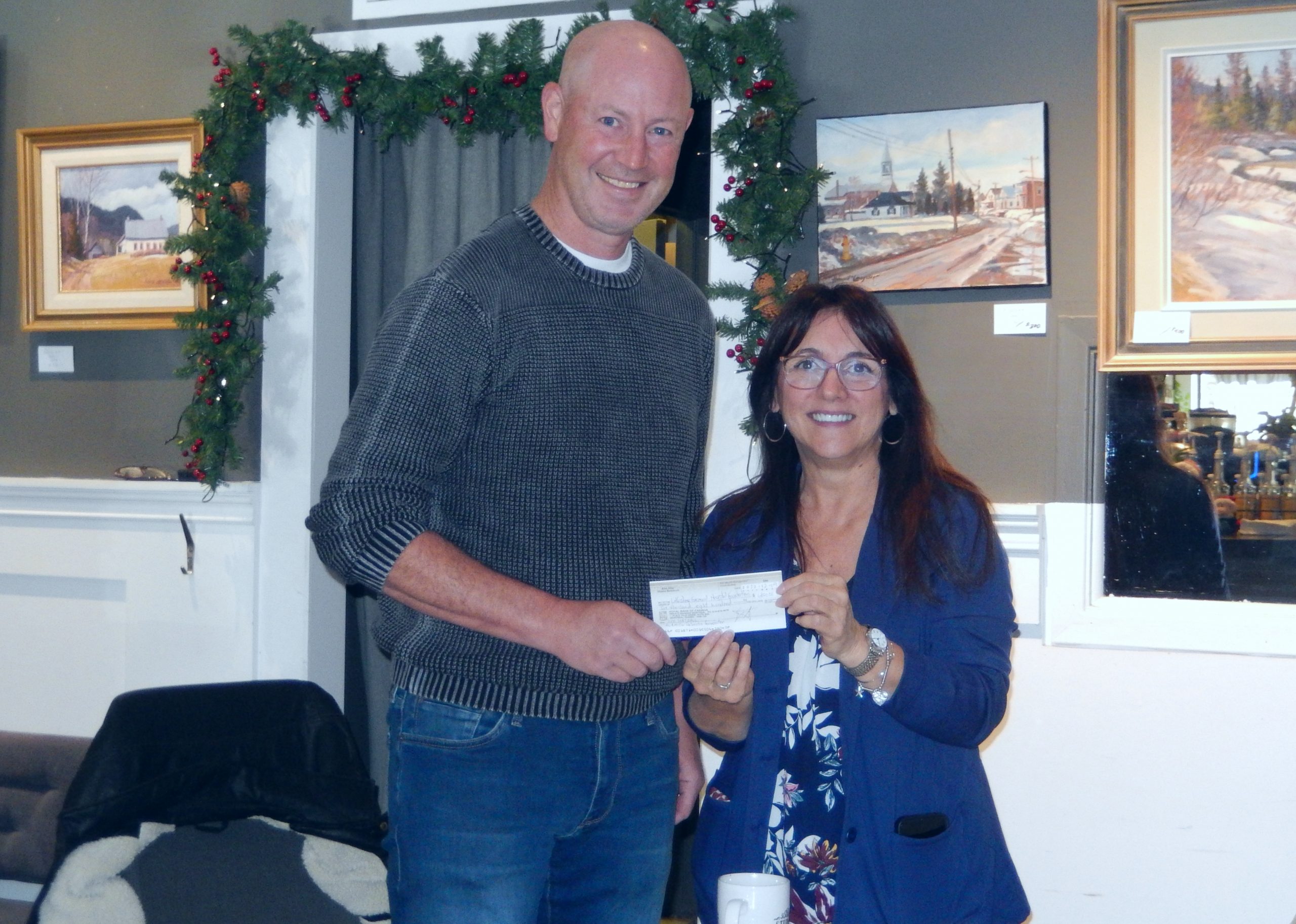 September 18th:  Carole Ravenda of the Lakeshore General Hospital Foundation was on hand to receive the cheque from Cedar Park Softball players Ken McCarthy and Liam Alcalde, who is the president of the League.  Also on hand was City of Pointe Claire mayor Tim Thomas. 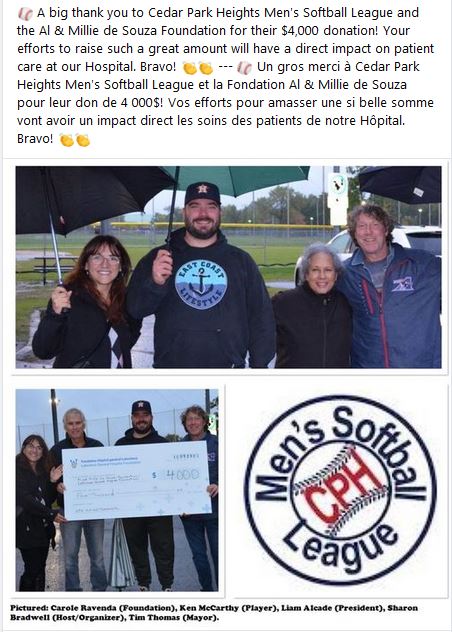 As the pandemic continued to play havoc with league and tournament games, St. Louis player Andy Brookman took it upon himself to do some fundraising.  The whole team plus family and friends got together to raise $2,035 for the Sian Bradwell Fund. 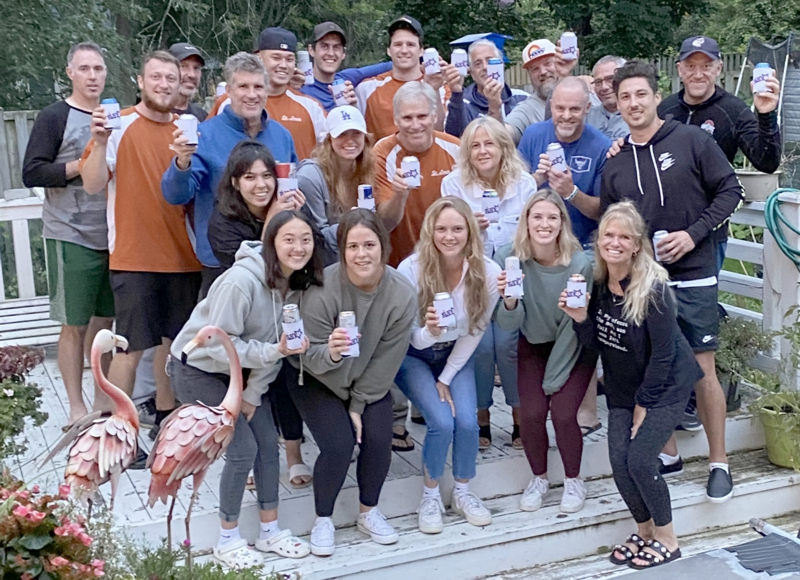 – CPH tournament cancelled due to pandemic

– CPH tournament cancelled due to pandemic

In spite of bad weather and the forced re-scheduling of the tournament to peak holiday season, the League still managed to contribute $4,000. 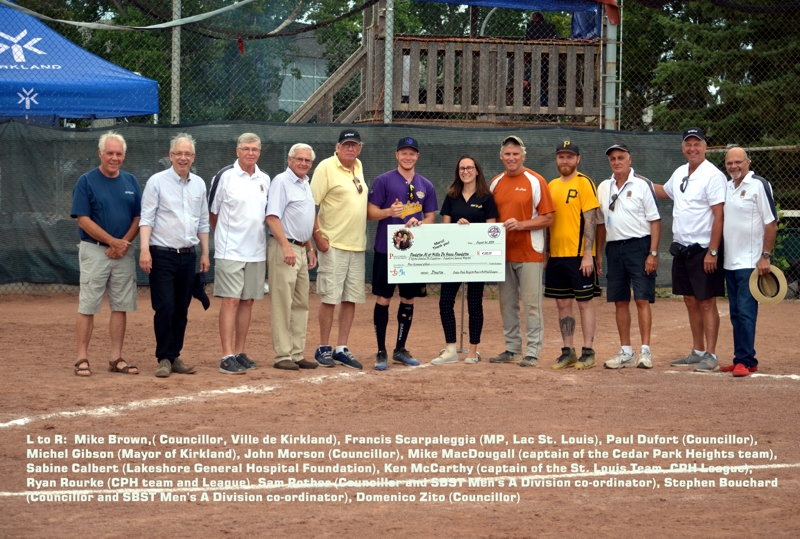 Another cheque for $10,000 … congratulations to the CPH players and Executive Committee on another very successful tournament and thank you so very much for your generosity!

The Cedar Park All-Stars and St. Louis teams presented a cheque for $10,000 to the Lakeshore General Hospital:

Members of CPH teams present a cheque for $9,000 to Sabine Calbert of the Lakeshore General Hospital Foundation.  On hand for the occasion were Mayor Michel Gibson and Councillors Paul Dufort and John Morson of the Town of Kirkland, and Lac St. Louis MP Francis Scarpaleggia.  Eyal Artzy, president of the Cedar Park Heights Men’s Softball League is in the centre. 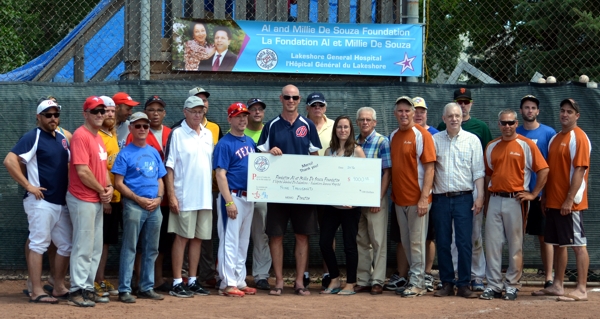 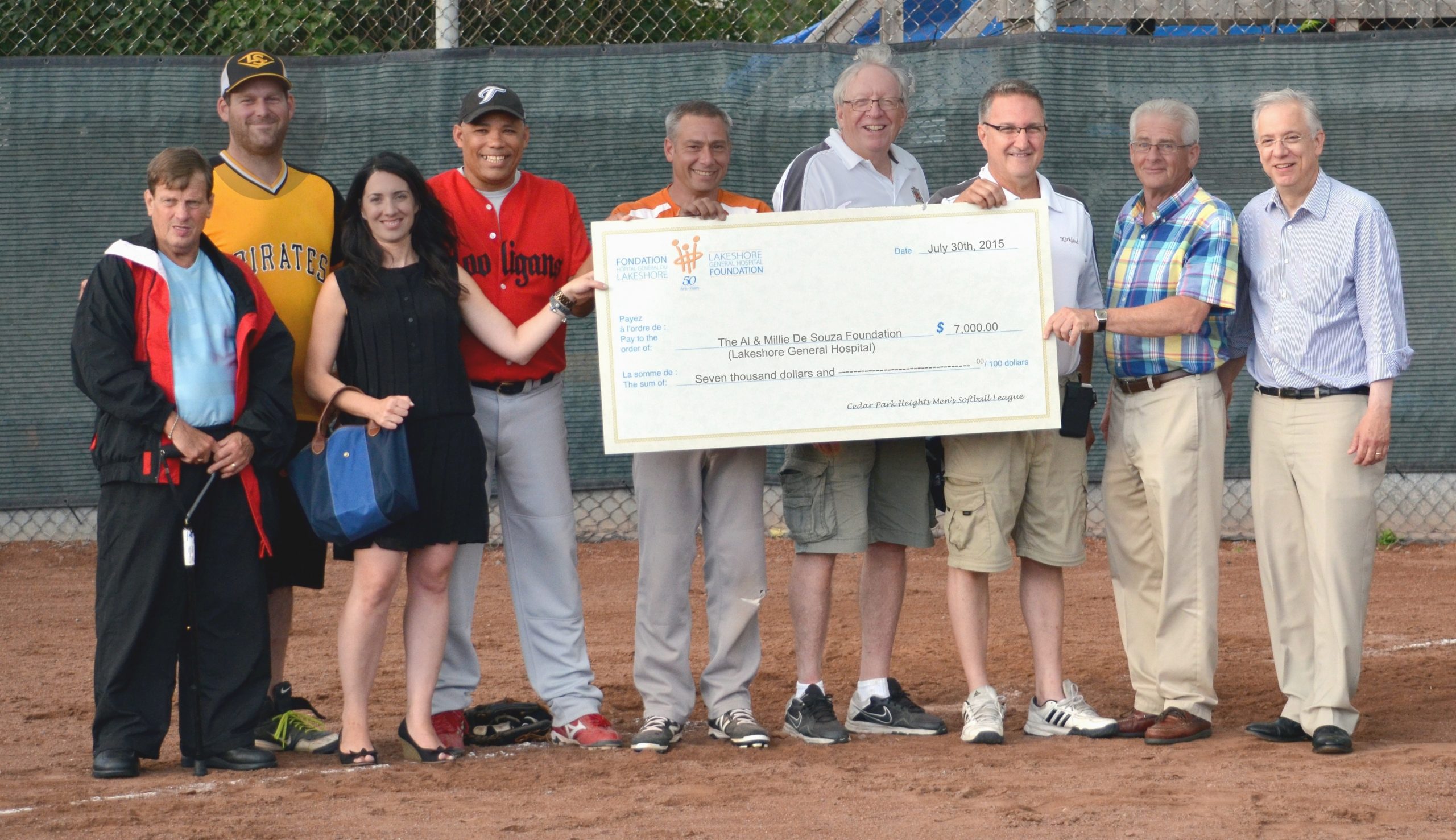 CPH members present a cheque for $7,000 to Anne-Marie Milard of the Lakeshore General Hospital. 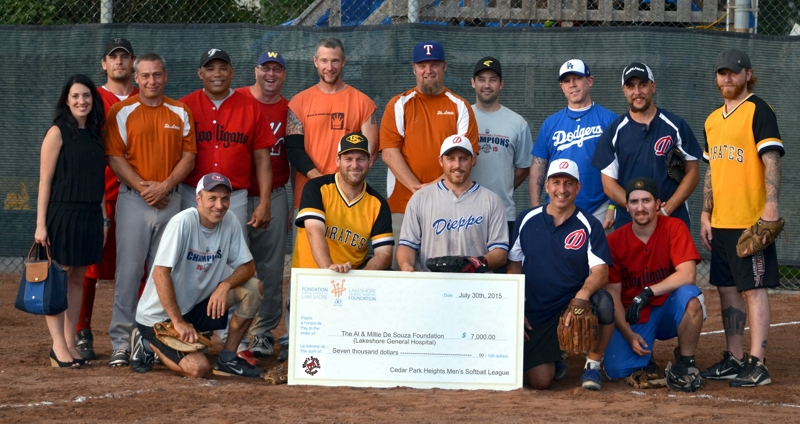 The Cedar Park All-Stars present a cheque for $2,000 to Carole Ravenda and Anne-Marie Milard of the Lakeshore General Hospital: 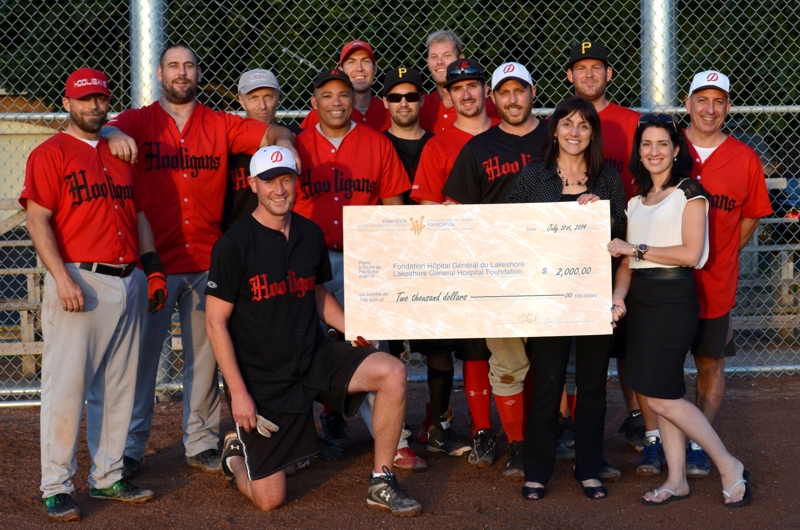 Jon Rigalsford helps Michelle Le Donne put up the Hospital’s banner before the cheque presentation of $3,188.03 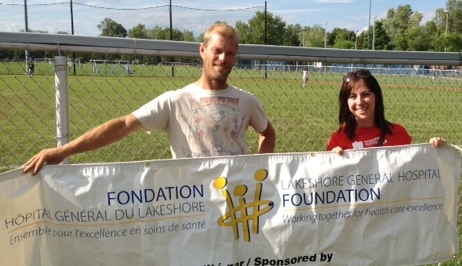 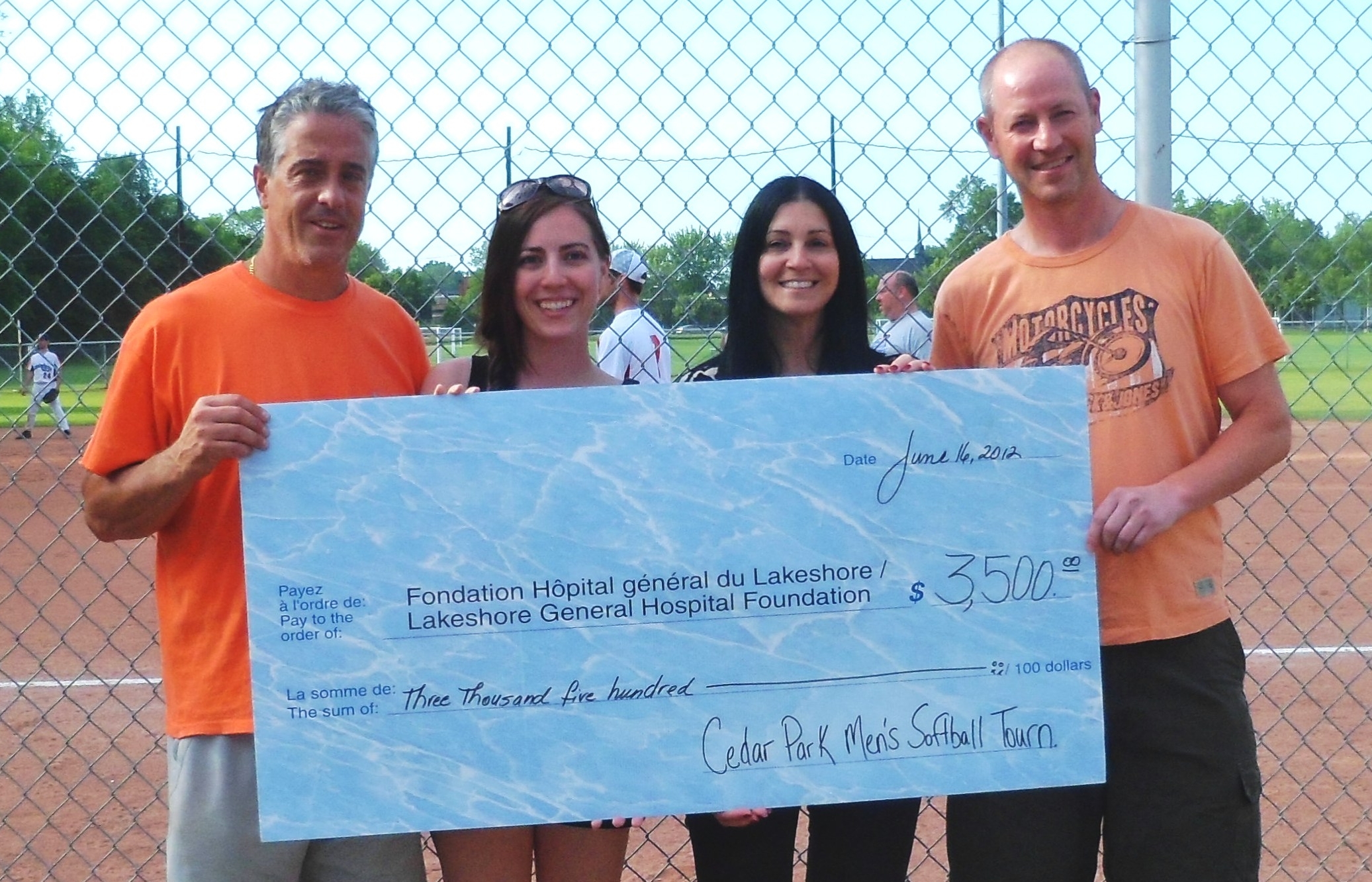