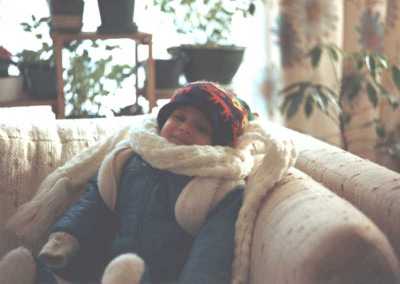 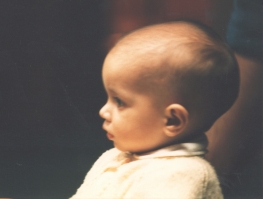 I used to lie on the bed with her and show her beautiful coloured pictures of tiger cubs playing, and, for effect, demonstrate how tigers growl. At the age of 5 months, she started growling at birds, squirrels, kittens and other small animals which used to come into our garden as we looked out of the bedroom window to the back yard. It was so funny to hear the sound come from such a tiny girl.  At the age of 6 months, she tried to imitate Donald Duck, as I used to do.

She was the centre of our universe.

Sian (pronounced “SHAHN”, hers is a Welsh Gaelic name) was diagnosed on May 1st, 1985 as having a form of cancer called ‘primitive neuroectodermal tumour’ in her liver, spine and foot. Doctors thought the cancer had started in her pancreas and spread through her bloodstream. The first visible sign had been a lump which had appeared literally overnight.

She responded well to the chemotherapy protocol for a short time, but when it was evident that the drugs were not working any more, she underwent radical abdominal surgery in October of 1985, followed by an intensive course of radiation treatment. She was just learning to pull herself upright when the recurrence of tumours in her legs caused the femur (the biggest bone in the human body) of her left leg to fracture. She never had a chance to learn how to walk.

I’ll never know how she managed to smile through the haze of nausea and medications and pain, but manage it she did. Her sunny little face was the light that brightened even the coldest days of Winter.

Less than a week before she died in March, 1986, at the age of 17 months, she was still trying to growl at stuffed toy animals.

I wanted to write more, and in more detail, but I cannot:  the memories are too painful. This is all I can bring myself to write at this point.  Perhaps I will be able to write more, some day.